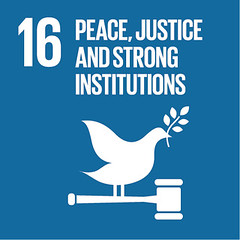 Sustainable Depelopement Goal Number 16 Subtargets on Peace, Justice and Strong Institutions – Ask your government what they did since 2015 to reach the 12 subgoals
What’s the goal here?

To promote peaceful and inclusive societies for sustainable development, provide access to justice for all and build effective, accountable and inclusive institutions at all levels.

How many people have crossed international boarders as migrants or refugees?

The number of inter-national migrants—per-sons living in a country other than where they were born—reached 244 At least one fifth of humanity lives in countries experiencing significant violence, political conflict, and insecurity.

Where has that been occurring?

The most notable movements occurred in South-East Asia, the Middle East, North and sub-Saharan African, Central America and Europe, while the impact was felt across the globe. Most were fleeing conflict, persecution, poverty or some other threat to their life and well-being; all of them in search of a better life.

What would be the cost of not taking action now?

High levels of armed violence and insecurity have a destructive impact on a country’s development, affecting economic growth and often resulting in long standing grievances among communities that can last for generations. Sexual violence, crime, exploitation and torture are also prevalent where there is conflict or no rule of law, and countries must take measures to protect those who are most at risk. At least one fifth of humanity lives in countries experiencing significant violence, political conflict and insecurity. If we don’t address the issue, more than 50 per cent of the world’s poor are likely to live in conflict-affected and fragile states and this percentage is projected to increase to 82 per cent by 2025.

But I’m neither refugee nor migrant.
Why should this matter to me?

The world is at a critical juncture. We are witnessing the highest level of human suffering since World War II. Every day, civilians are deliberately or indiscriminately killed in wars. Preventing conflicts and finding political solutions to resolve them is our first and foremost responsibility to humanity. All migrants and refugees must be treated with respect and dignity. We must counter xenophobia, discrimination and violence against those seeking protection.

Refugees have the right to seek asylum and safety.

What can we do?

As a citizen, take a genuine interest in what your government is doing, and raise awareness in your communities about the realities of conflict and the importance of peaceful and just societies.

Take action in your communities through

·      organizations to promote peace and justice.

we can make crossing international borders a matter of informed choice, not desperate necessity.

Ask your government what they did since 2015 to reach the 12 subgoals!

Significantly reduce all forms of violence and related death rates everywhere
16.2
End abuse, exploitation, trafficking and all forms of violence against and torture of children
16.3
Promote the rule of law at the national and international levels and ensure equal access to justice for all
16.4
By 2030, significantly reduce illicit financial and arms flows, strengthen the recovery and return of stolen assets and combat all forms of organized crime
16.5
Substantially reduce corruption and bribery in all their forms
16.6
Develop effective, accountable and transparent institutions at all levels
16.7
Ensure responsive, inclusive, participatory and representative decision-making at all levels
16.8
Broaden and strengthen the participation of developing countries in the institutions of global governance
16.9
By 2030, provide legal identity for all, including birth registration
16.10
Ensure public access to information and protect fundamental freedoms, in accordance with national legislation and international agreements
16.a
Strengthen relevant national institutions, including through international cooperation, for building capacity at all levels, in particular in developing countries, to prevent violence and combat terrorism and crime
16.b
Promote and enforce non-discriminatory laws and policies for sustainable development

To find out more about Goal #16 and other Sustainable Development Goals, visit: