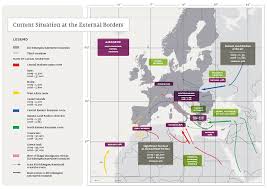 Based on his own experiences the author and human rights activist Elias Bierdel
describes the Walls of „Fortress Europe“ questioning the existing border regime,
which is ready to accept thousands of anonymous victims as collateral damage,
year by year.

Elias Bierdel grew up in Berlin. After working as a journalist and correspondent
for ARD in the Balkans he turned to humanitarian help and became chairperson
of the NGO „Cap Anamour Committee“. Using the ship „Cap Anamour“, this
organization has saved thousand of boatpeople, Cambodian refugees from the
open sea, and later in 2004 African refugees in the Mediterranean Sea. After
saving these from drowning and starvation Bierdel and the Captain of Cap
Anamour were detained and brought to an Italian court, under the accusation
of migrant smuggling. In 2010 however, both were acquited.
As a co-founder of the NGO „borderline Europe“ Bierdel received several human
rights awards, such as the Austrian UTE – Bock – Award for courage of his
convictions, and the International Blue Planet Award. He works as a research
fellow at the Austrian Peace and Conflict Research Center in Burg Schlaining in
the field of border management.
His book „Ende einer Rettungsfahrt – Das Flüchtlingsdrama der Cap Anamour“
was published by Ralf Liebe Verlag in Germany.

A VIC grounds pass is required to enter the Vienna International Centre.

Recipients of this invitation, or their guests, who do not hold a VIC grounds pass,
are kindly requested to register by sending an email
with their full name to reno@wvnet.at

Registered participants will be included in a list held by UN security at the main gate
of the VIC. Please present this invitation along with a valid ID or passport at Gate 1 of
the VIC. Please consider that formalities at Gate 1 may take time and kindly arrive sufficiently in advance of the meeting.

The VIC, 1220 Wien, Wagramer Strasse 5, is best reached by U1 (Kaisermühlen/Vienna International Centre).