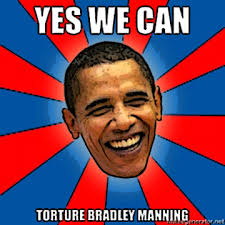 AVAAZ: „Wikileaks whistleblower Bradley Manning is being subjected to brutal torture in a US military prison, part of a broader effort to silence and intimidate those behind any further leaks.“

The government is split on Manning’s abuse.

President Obama cares about the US global reputation – a massive global outcry can push him to stop the torture:

Right now, Wikileaks whistleblower Bradley Manning is being tortured in a US military prison.

Manning is subjected to

He shall have released a video of US soldiers massacring Iraqi civilians.

And his brutal treatment appears to be part of

The US government is split on this issue, with diplomats publicly criticizing the military for Manning’s treatment, but President Obama has stood aside so far.

Avaaz: „we need to show him that it’s at stake here. Let’s build a massive global call to the US government to stop torturing Manning and uphold the law. Sign the petition below — our message will be delivered through hard-hitting ads and actions in Washington DC as soon as we reach 250,000 signatures:

„But today, Bradley Manning is utterly isolated in a cell without sheets, not allowed to exercise and is being subjected to brutal humiliation that is causing serious mental harm. This violates US and international law.

Bradley is being held under ‚prevention of injury‘ status despite

There has been a crack down on Wikileaks since the explosive revelations of US military crimes in Afghanistan and Iraq.

Many speculate that this brutal pressure on Bradley is intended to force him to implicate WikiLeaks founder Julian Assange.

Obama promised Americans and the world that he would protect, not persecute, whistleblowers:

„Often the best source of information about waste, fraud, and abuse in government is an existing government employee committed to public integrity and willing to speak out. Such acts of courage and patriotism, which can sometimes save lives and often save taxpayer dollars, should be encouraged rather than stifled.“

Bradley’s cruel treatment does the opposite and sends a chilling message to others who may want to expose important information. Let’s act quickly to put massive international pressure on the United States government to honor its commitment to human rights and the protection of whistleblowers and end the shockingly cruel treatment of their own citizen.

Avaaz: „While reasonable people can disagree about the approach of Wikileaks and the the rights or wrongs of those who delivered information to them, the illegal torture of Bradley Manning, who has yet to receive a fair trial or be convicted of any crime, is a shameful violation of human rights and human dignity.“

Emma, Ricken, Pascal, Janet and the rest of the Avaaz team

Check out Obama’s statement on the importance of whistleblowing released on his official website http://change.gov/agenda/ethics_agenda/

The Implications of the Inhumane Treatment of Bradley Manning, Huffington Post
http://www.huffingtonpost.com/matt-kane/bradley-manning-obama_b_832933.html

Support the Avaaz community! We’re entirely funded by donations and receive no money from governments or corporations. Our dedicated team ensures even the smallest contributions go a long way — donate here.

Avaaz.org is a 7-million-person global campaign network that works to ensure that the views and values of the world’s people shape global decision-making. („Avaaz“ means „voice“ or „song“ in many languages.) Avaaz members live in every nation of the world; our team is spread across 13 countries on 4 continents and operates in 14 languages. Learn about some of Avaaz’s biggest campaigns here, or follow us on Facebook or Twitter.

This message was sent to barbara.prechelmacher@gmx.at. To change your email address, language, or other information, send a message to unsubscribe@avaaz.org, contact us via this form — or simply click here to unsubscribe.