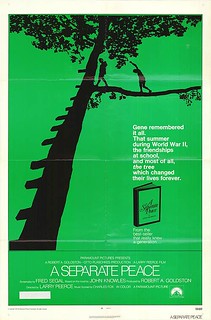 Wikipedia: „A Separate Peace (1959) is a coming-of-age novel by John Knowles. Based on his earlier short story, „Phineas,“ it was Knowles‘ first published novel and became his best-known work. Set against the backdrop of World War II, A Separate Peace explores morality, patriotism and loss of innocence through its narrator, Gene.“

Summary of the Book by Knowles

In the late 1950s Gene Forrester returns to Devon in England, an elite prep school in New Hampshire. Walking through the campus in the cold November mist, Gene remembers his experiences at Devon during World War II. Especially the Summer Session of 1942, when he was 16 years old changed his live.

At a tree by the river

Gene thinks of his friend and roommate, Phineas (nicknamed Finny), the best athlete in the school. As the story moves into the past, Finny jumps from a high limb of the tree into the river — an activity forbidden to all but the oldest Devon boys. He dares Gene to jump as well. Gene jumps, but is frightened. Finny, however, takes such delight in the dangerous, forbidden jump that he forms the Suicide Society. He invites all the Devon boys to test their courage by jumping from the tree into the river. At each initiation, Gene and Finny make the first jump, but Gene never gets over his fear.

The best student in the school

Finny’s status as the best athlete inspires Gene to strive to become the best student in the school. Gene applies himself to his studies seriously, but feels pressure from Finny to join in his activities, especially the Suicide Society. After failing a math test because of a forbidden trip to the beach, Gene suspects that Finny is deliberately trying to sabotage his studying. This silent resentment builds until the end of the summer, when Finny insists that Gene leave his books to jump from the tree again. High in the tree with his friend. Gene impulsively jounces the limb and causes Finny to fall.

This ends his involvement in sports, a consequence that brings the guilty and fearful Gene to tears. Once in the infirmary and again at Finny’s home, where he is recovering, Gene tries to confess that he caused the fall. But Finny’s trust in Gene is absolute, and he refuses to believe the confession.

Without Finny around, Gene grows closer to Brinker Hadley, a student leader who teases him with the accusation that he got rid of Finny to have their room to himself. Brinker’s joking frightens and angers Gene, but his new friend’s energy also inspires him. One night, after Brinker announces his intention to enlist immediately, Gene decides to enter military service as well, a resolution that disappears suddenly upon Finny’s return.

Finny tells Gene that he must become an athlete for both of them and proposes to train him for the 1944 Olympics. When Gene tries to explain that the war will most certainly make the Olympics impossible, Finny announces that the war is a fake. Finny’s dream of the 1944 Olympics becomes a shared reality between the friends as the former athlete trains his replacement. Gene joins his friend in a peaceful retreat from the world, celebrated in the school’s (unofficial) Winter Carnival.

Even a friend’s enlistment and emotional breakdown does not intrude upon the peace Gene finds with Finny, until one evening when Brinker and some of the other boys drag Gene and Finny to the Assembly Room, where they propose to get to the truth about Finny’s injury. In a mock trial, Brinker questions Finny, searching for proof of Gene’s responsibility in his fall. When another boy’s memory of the fall opens Finny’s eyes to his friend’s guilt, he lurches angrily from the room, falling on the stairs and breaking his leg again.

At a distance, Gene follows Finny to the infirmary, hoping to talk with him alone. Finny, however, will not talk with Gene until the next day, when he asks sadly if his friend really meant to hurt him or if it were simply an unconscious impulse. Gene insists that he acted without hatred — blindly — and Finny accepts the explanation with relief. Later that day, in an operation to set the leg again, Finny dies when some marrow from the broken bone enters the bloodstream and stops his heart. Gene accepts the news without crying, because he feels as if he has died, too.

Later, after the war, Gene looks back and understands that he fought his real war at Devon. Gene’s true enemy was the narrow, spiteful self that harbored jealousy, and that self died with Finny.